Cools.com: The Rising Popularity of Drag Kings: An Interview with Spikey Van Dykey & Mo B. Dick 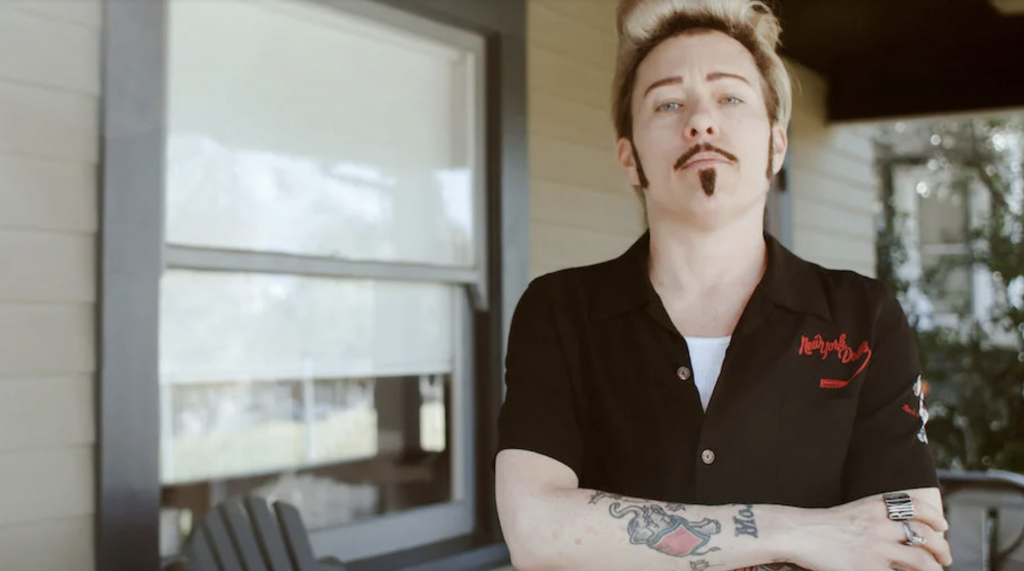 The Rising Popularity of Drag Kings: An Interview With Spikey Van Dykey & Mo B. Dick

The concept of drag is nothing new, but in terms of the mainstream conceptions of, one term comes to mind: Drag Queens. A folk etymology states that the term “drag” is an acronym of “Dressed as a girl,” in regards to male theatrical transvestism. But while drag is overwhelmingly associated with gay men and gay culture, there are drag artists of all sexualities, including Drag Kings.

The Drag Queens’ depictions of larger-than-life performances of femininity have been celebrated for decades. However, the lesser known community of Drag Kings has been on the rise for over thirty years.

When I first reached out to social media asking if they knew anyone in the Drag King community, there was radio silence followed by suggestions for Drag Queens. Perhaps a peek into how “not woke” my community outreach seems to be, my own research led me to find a booming community of people representing this Kingdom.

It was Diane Torr who paved the path for Drag Kings in the late 80s, leading Drag King Workshops that showed women how to pass as men. Torr was also featured in the 2002 film on Drag Kings, Venus Boyz—a documentary on the world of female masculinity and what provokes some to dress up for a night, and others transition for a lifetime.

My initial introduction into the Drag King world was quite recent. Quick videos kept showing up on my Facebook feed that documented the colorful and unique world of transforming into a King. One that particularly caught my eye featured Spikey Van Dykey. A glittering beard and twirling mustache lit up with vibrant hues of pink and purple, fake press on nipples adorned with hoops, drawn-on abs, and a leather bondage-style contraption hoisted over his shoulders and strapped over his chest made for a vision that felt celebratory of women representing men, not just of the male gender. The image it created was an expression of something I’d never quite seen before, and yet I was entirely intrigued.

Another inspiring character I stumbled upon was Mo B. Dick—a tough-talking Brooklyn dude with so much facial animation and swagger it’s merely mesmerizing just to hone in on the theatrics. But upon reading up on this character, I realized he was one of the original Drag Kings who brought to light the community in the late 90s and 2000s, inspiring future Drag Kings. Mo B. Dick started the world’s first weekly Drag King party called Club Casanova that created a boisterous community of Kings, and ultimately garnered international press and attention.

It makes sense with just how woke our world is working to become that more emphasis is given to allowing room for everyone to express themselves. This undoubtedly brings people together to create a community that feels heard and defined in an oppressive world that has felt very cis white male dominant. The result is, to say the least, a Facebook newsfeed that has some intriguing discoveries.

But the more research I did on Drag Kings, the more questions I had, so I reached out to Jamie Kalman, also known as Spikey Van Dykey, and Mo Fischer, also known as Mo B. Dick, to find out more, and what I came away with is an understanding of a career that is self-explorative, entertaining, and has served as inspiration for others to find their voice within the Drag King community.

COOLS: What was it that inspired you to drag yourself to the other side of the fence, where masculinity was represented and celebrated by the opposite sex?

Spikey Van Dykey: Being female, I felt like it was a fantastic opportunity to exaggerate the accents of the male persona. I absolutely loved John Travolta and Patrick Swayze when I was a child. Being someone who also struggled with gender identity issues, it was also the perfect opportunity to represent everything I wanted to be as a male. Lucky for me I had drag as an outlet to express my androgyny and present my longing to embrace my masculinity.

Mo B. Dick: I was inspired to become a Drag King from seeing other Drag Kings such as Buster Hymen who portrayed super sexy Jim Morrison and Julie Wheeler who was the iconic Elvis in an all female rendition of Viva Las Vegas in the summer of 1995 in Provincetown, Mass. I never knew Drag Kings existed so I was blown away by them. Shortly after, I was in San Francisco and read an article in the SF Weekly on the Drag King scene there. The transformations were astounding so I thought what the hell, let me try it.

COOLS: Was there any insecurity that went into this decision?

SVD: Absolutely! I knew that going into the performance industry that as a female I would be facing heavy amounts of scrutiny. I also knew that Drag Kings were a rare breed of art at the time, and when it came to the Queens I would have to prove myself in order to become respected or seen as an equal. Even though I faced endless amounts of obstacles, I was lucky enough to know several Queens who were more than welcoming to my art.

COOLS: Did you ever feel like you might want to make this a mainstream career, or was it something you wanted to do simply to express a side of yourself you couldn’t do in your everyday life? And what is the reality for you today?

MBD: My coming of age was during the heyday of the punk era so I grew up in the underground existing on the other side of the tracks. I never wanted to drown myself in the mainstream. I never thought being a Drag King could become a career and I never did drag to be in the mainstream though gratefully I achieved great success. I garnered a lot of success by creating the world’s first Drag King party called Club Casanova; by doing the world’s first Drag King tour of US & Canada; by being hand picked by John Waters to be in his film Pecker; by doing TV appearances; and by being a media darling of the East Village NYC.

When I was a Drag King, I had the time of my life. It was SO much fun leaving people bewildered. Being a ‘man’ allowed me a lot of freedom to roam the streets of NYC because I was never hassled or harassed like I was as a woman. My motto was “instead of being an angry woman, I became a funny man.” John Waters even called me a “sexual terrorist.”

Today I am documenting Male Impersonation and Drag King history for a website (dragkinghistory.com) that will catalogue all of the women who donned men’s attire for theatrical purposes, because there’s a lengthy history that needs to be told.

COOLS: So as a Drag King, do you find yourself faced with much inequality? Both outside of the queer community and within it?

SVD: Unfortunately, I do. I feel as though the struggle only makes me want to fight harder to gain that respect. When we have celebrity Drag Queens and people like RuPaul invalidating our art, it actually inspired me to start up a movement called The Drag King Project. The group was created to give other Drag Kings the recognition they deserve and let the world know that we are here and we are valid.

SVD: My biggest inspiration has always been Mo B Dick. I also look up to kings like Tucker Noir, Damien D’luxe, Ivory Onyx, and Goldie Peacock.

COOLS: What’s your ultimate goal as a Drag King? Do you simply want to have fun and express yourself? Or is there a larger picture here, like awareness, equality, etc.

SVD: To inspire. I ultimately want to bring awareness to the talent and magic that Drag Kings have to offer the world. I believe it is such a spectacular and intriguing form of art, and it deserves recognition. We deserve to be seen and we are here to take the scene by storm.

MBD: At first I did drag for the kicks, then I realized the power behind the message. It’s more threatening for a woman to put on a suit than it is for a man to put on a dress.

My ultimate goal as a Drag King is to create visibility and viability for women in the pantheon of theatrical performance and drag culture. And hopefully create a safe world for people to freely express themselves without shame but with joy, inclusion, and fun!

COOLS: How long does it take to get into “full Spikey” mode. What does the process involve?

SVD: It generally takes anywhere from an hour and a half, to two hours. The hair takes 30 minutes and then I tape down my breasts, shade my chest, apply contouring and facial hair to my face, apply fake nipples, and put on four layers of costuming (which generally ends up on the stage floor during the show) and that’s how you make a Spikey Van Dykey!

MBD: It takes about 45 minutes — from doing my hair, to gluing facial hair, to binding my breasts, and to dressing in a sharp suit.

COOLS: What would you say is the most captivating part about playing a Drag King?

SVD: I never imagined I would have such an impact on people. By getting on stage and doing what I love, I am unconsciously reaching out to others who also identify with gender identity issues or simply want to express their feelings or art on stage. I receive emails from people saying that I helped them become comfortable with themselves, encouraged them to come out of the closet, or inspired them to be a Drag King. It’s absolutely beautiful. I feel like this is my purpose and I am so lucky have the opportunity to truly embrace that as an artist.

MBD: The most captivating part of being a Drag King is the freedom it allows me. The permission to say whatever the hell I want to whomever, whenever and wherever.

COOLS: Do you think Drag Kings are about to see their day? As in, we’ve all heard of and enjoyed drag queens. RuPaul’s show has had a major influence on the popularity. What’s it going to be for Drag Kings?

SVD: I do! We are going viral! I’ve seen Kings all over Buzzfeed, The Huffington Post, Rebel Circus, Vogue, and in Elle Magazine. It’s our time and I don’t think it’s going to take a competition. It’s going to take us working together as a community to make this happen. We are valid and we are ready to show the world that we are more than ready!

MBD: Drag Kings enjoyed our days in the late 1990s early 2000s. We didn’t have Facebook, YouTube, Instagram, Google or cell phones, so it wasn’t documented as widely as today. We had old school newspaper articles, documentaries, and books written about us.

As for today, the sky’s the limit, so we shall see. I say The Drag Kingdom has come!