Drag queens and kings have a long and rich history, but right now, we’re in the midst of a drag renaissance. Queens in particular — thanks largely to the popularity of Ru Paul’s Drag Race — are everywhere, racking up millions of Instagram followers, landing major beauty campaigns, and broadening the spectrum of how we explore gender identity through dazzling performances.

But what about drag kings? “Drag kings are still largely ignored,” says Mo B. Dick, co-creator of dragkinghistory.com, a project that’s being archived in the Library of Congress. “Changing that is vital because we’re only seeing portions of the whole spectrum. You know, if you’re looking at the color wheel, you gotta look at all the colors — you can’t just pick and choose.”

Like any good art form, what it looks like to be a drag king has evolved along its own beautiful spectrum — from the feminist subversive power of natural-looking male impersonation to over-the-top, flamboyant characters that require serious makeup skills. “There are hundreds of talented kings who have been killing it for decades, have been pushing their art, and pushing the art of drag,” says drag king Luc Ami.

I loved to play dress up and I used to love looking at my mom’s lipsticks — I just thought it was so fascinating that you could just change how you looked so dramatically.

In terms of my life as a professional drag king, it was November of 1995 that I went into drag.
I thought previously, Oh, you have to be Butch. You have to be a lesbian. You have to be X, Y, and Z. Then I came to realize, anybody can do this. So, I got my hair cut short and had the hair clippings and I went to a drag queen friend’s house. All they had was eyelash glue so we chopped up the hair and put it on my face. I ended up wearing a ski cap and baggy clothes and stuffed my panties with a sock. I went to this local dyke bar Meow Mix and I passed. They guys just said “Oh hey” whereas before I would have been catcalled, verbally accosted, or ogled — it was really remarkable. Wearing this mask of facial hair, I could feel safe and hide and protect myself essentially.

Around this time, Diane Tour, Johnny Science and Annie Sprinkle created a drag king workshop where they taught the mechanizations of a drag king — from the facial hair to the contouring of the features, to the binding of the breasts and wearing an appendage of some sort. So that’s the school that I came from which was more about realness [and male impersonation]. That developed into the drag we see today, which is more makeup-oriented.

I’m very excited by the evolvement. The kids today have taken it to a new level that is really, really spectacular. It’s much more draggy and theatrical from the costume to the makeup, to the hair and the different characters. That has been really, really fun to watch. Now there’s the look kings and the performer kings and the theater kings. I’m more a theater king — I have a specific character that I play. There are not many drag kings who are comfortable as MCs because it means taking up space and using your voice, which women are often not as comfortable doing (not that all drag kings identify as women).

I would like to see more women supporting drag kings. I’d like to see women coming out in droves for the kings just as people do for drag queens. It’d be cool. The embracing of female masculinity is very cool.

I’ve been a theatre kid all my life and was often given male roles as a kid (probably because I was loud and didn’t mind playing those roles). As I got older I shifted to doing more behind the scenes work and was especially intrigued by the face painting camp I did in high school and the creative special effects makeup courses I took in college. In college, the LGBTQ club and The Theatre Department I was enrolled in both held drag shows and drag felt like a great way to blend playing with creative makeup and performing.

I originally had a drag queen persona because my understanding of drag was super limited until I found out that drag kings and club kids existed and learned that I could find a form of drag that I better connected with. Exploring ways to express and perform my drag helped me understand both my own gender and sexuality and how I wanted to comment on gender and sexuality through my drag.

I definitely have seen a shift in the representation of drag kings. I think a lot of references when I first started out were drag kings emulating and commenting on cisgener/heterosexual men. There are plenty of kings that still do and that is a 100% valid form of drag, but I think we’ve also seen more kings getting more flamboyant with their drag, emulating and commenting on queer and fluid forms of masculinity. For drag kings specifically, we’ve seen a shift from male impersonation and natural makeup to more exaggerated forms of makeup — bolder contours and highlights, colorful eyeshadows, blush and more.

Drag culture is becoming more and more about seeing how you can keep pushing your aesthetic — whether it’s the details in the outfits, the blending and details in the makeup and/or how you perform. I think people definitely expect more when it comes to makeup, regardless of the type of drag. Artists are paying more attention to how it reads on camera and making sure it’s visually appealing — especially in this past year of quarantine where we were only seeing drag content online!

I’ve had a strange relationship with the beauty industry. Makeup has always felt like a performative process, something used as a means to transform myself. As a result, I’ve felt disconnected with beauty makeup and often don’t use it in my daily life. The beauty industry is not great about creating products for people with darker skin (I remember my makeup teacher having to create a contour color for me in college because the contour in the darkest makeup kit was my foundation color — and I wasn’t even the darkest student in the class). Makeup for darker skin is improving but it’s still a process.

Doing drag was when I really started to like how I looked with makeup on and made me start to evaluate what about looking like a multicolored androgynous being was so comforting that I wasn’t connecting with in my normal skin tone and with beauty makeup. I’ve learned to be more comfortable with who I am out of drag but it’s definitely still a growing process. 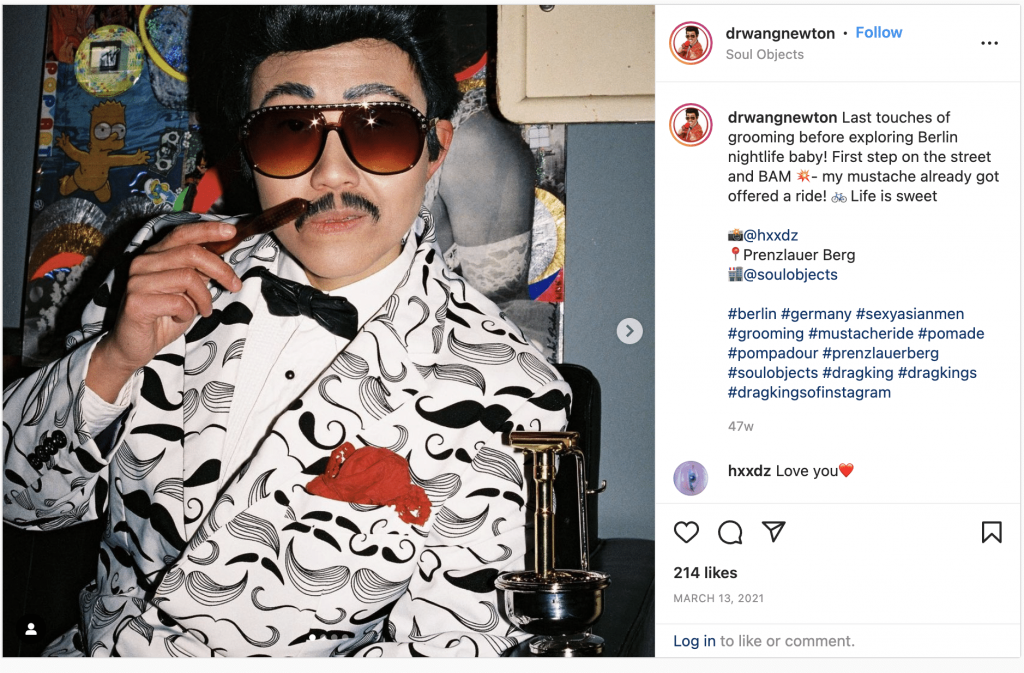 My personal journey into drag started on Halloween 2004 as a costume that received immensely positive feedback and continued invitations to events. My style is still considered standard masculine — that is, I express masculinity as society has traditionally established. While I serve an entertainer-in-suit vibe, drag kings have beautifully evolved to include more colorful make-up like our drag queen counterparts, plus present themselves in various ways along the gender spectrum.

The drag kings who are actually trained make-up artists are stunning. Who doesn’t love the make-up expert at the counter? And, who doesn’t love ye olde ‘drag make-up tutorial’ video!  Social media has allowed literally anyone in the world to watch and learn (and discover drag kings!). This gives anyone at any income or accessibility level a chance to ‘paint for the Gawds’ as we say. While social media blew doors wide open, I must give a nod to the concept of in-person connection and the Chosen Family community (a close relationship not based on being a blood relative). One absolutely does not have to be queer to do drag, yet I must acknowledge how many of the queer community are rejected by their own genetic family. It is a treasure to be able to have a ‘drag parent’ — one who provides nurturing advice in the art of drag and in life.

Believe it or not, I was pretty high femme for most of my life before drag. (I am now more androgynous/non-binary/genderfluid and presently do not desire to surgically transition to male.) As one who grew up in small-town America, representation is certainly important to me. For example, did you know that there are less than 40 drag kings of Asian heritage in the entire world and that it took me over a decade of performing before I discovered them? I used to love colorful makeup in my 20’s, but as masculine energy emerged within me in my 30’s, I feel it would be amazing to see the beauty industry showcase masculine make-up tricks like chiseled cheeks and sideburns.

As a drag industry insider and world traveler, I have the honor of seeing so much beauty in various forms. We are multi-talented Beings and creative beyond measure. Drag kings can certainly be just as glamorous and fabulous.