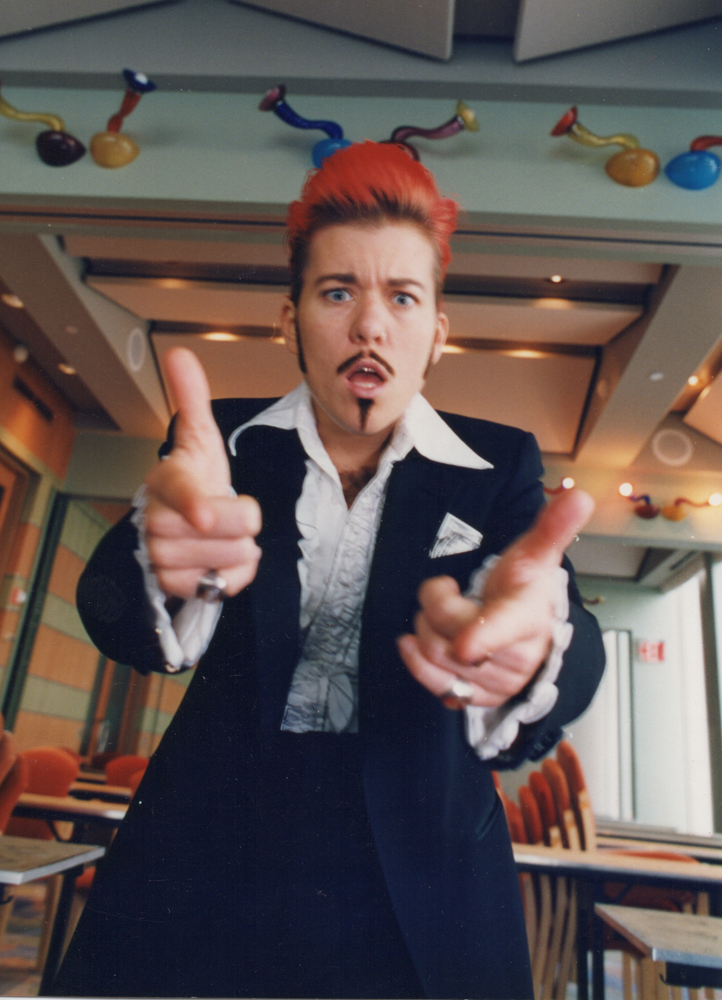 the man, the myth, the motion

Cited as one of the founding fathers of the modern-day Drag King movement, Mo B. Dick began in November 1995 in the East Village NYC. He was guided by close friends and mentors, Drag Queen Misstress Formika & Club King promoter Mario Diaz. Mo produced and hosted Club Casanova, the world’s first weekly party, dedicated solely to Drag Kings. Quickly becoming media darlings, the Drag King scene caught fire, and Mo B. Dick was the leader of the pack, taking the Kings to newfound acclaim. In fact, Mo caught the attention of famed cult filmmaker John Waters, who personally cast Mo in his film Pecker as T-Bone the stripper with a Drag King twist.

Mo B. Dick is the brainchild of Mo Fischer whose motto is “instead of being an angry woman, I became a funny man.” Mo B. Dick is a tough talker from Brooklyn, NY with an outspoken wit and charm that will make your heart swoon. With his signature pompadour, gold tooth, and sharp suits, Mo became the voice of a new generation within a burgeoning Drag King movement.

Despite a thriving Drag King scene, avid followers, and enthusiastic interest, Mo B. Dick was forced to close Club Casanova after 2 successful years, due to pressures from then Mayor Rudy Giuliani. Nightclubs and performance spaces took a turn for the worse when Giuliani systematically forced numerous bar and nightclub closures just because he didn’t like them.

Not one to be kept down, Mo B. Dick took the Men of Club Casanova on the road in the spring of 1998. This was an 18-city tour of the US and Canada, which was another first for the Drag Kings. It proved to be an eye-opening, influential experience for the scores of fans and followers who attended every show.

In 1999, The Drag King Book by Judith “Jack” Halberstam and famed photographer Del LaGrace Volcano hit the bookstores and fast became an international hot commodity. Mo B. Dick was heavily featured in this seminal work and knew his mission to put Drag Kings on the cultural performance-art map became a successful reality, as this fostered Drag King communities all over the world.

Mo B. Dick was also heavily featured in the documentaries: Venus Boyz by Gabriel Baur in 2002, Sex2K: Drag Kings for MTV in 2000, God Shave the Queen for HBO in 1999, and Downtown Darlings for Sundance by Daniel Falcone in 1998. Mo’s appearances expanded to indie films and television shows: Pecker by John Waters in 1998, Terror Firmer by Troma in 1999, Sex & the City, and Maury Povich. He even crossed the stage in theater productions of Shakespeare with Borax Productions, original works by Mabou Mines, and the NYC Fringe Festival.

2001 and 2002 saw two more tours of US and Canada with local Drag King communities opening up for The Men of Club Casanova, and once again proving this was the hottest ticket in every town they visited.

In early 2004, Mo left beloved NYC and moved to Los Angeles, CA. After a brief hiatus, Mo B. Dick dusted off his leopard suit, and shaped up his pompadour, to create a web series and make nightclub appearances. 2013 saw a cameo in the pilot for Rebel Wilson’s television show Super Fun Night though the footage disappeared on the cutting room floor. In 2012, 2014, 2015, Mo served as a guest judge for the annual San Francisco Drag King contest organized by fellow Drag King and producer Fudgie Frottage.

In January 2018, Mo teamed up with fellow Drag King Ken Vegas of Wash, D.C., to co-create DragKingHistory.com, a website dedicated to preserving this art form. And Flarington King of Toronto, Canada served as acting consultant in the formation of this project. The website showcases all of the women who have donned men’s attire for theatrical purposes from breeches roles to en travesti, variety to vaudeville, male impersonation to drag kings and drag kings to the gender-free. In 2020, The U.S. Library of Congress requested and was granted permission to archive this website for generations to come.

And in 2020, while home in quarantine due to Covid-19, Mo co-produced & hosted Kings of the World, a global cyber Drag King variety show with Johnny Gentleman and Pelvis Breastly. These shows fostered the Drag King community and camaraderie among six of the seven continents and continued to further galvanize the global outreach for Drag King’s.

Mo B. Dick celebrated his silver jubilee as a Drag King in November 2020. To celebrate, Mo teamed up with Flarington King, Fudgie Frottage, and Ken Vegas to co-produce Drag King Legends, an online event that aired on February 21, 2021. This event showcased the Drag Kings with 25 or more years of experience who have contributed greatly to the Drag King community and kept the art form going.

For more than 25 years, Mo B. Dick has been the subject of books, documentaries, articles, periodicals, podcasts, and more on Drag Kings proving he is a force to reckon with.

“Gender confusion is a small price to pay for social justice.” Zippy the Pinhead